Let's Give Computer Science to 100 Schools! 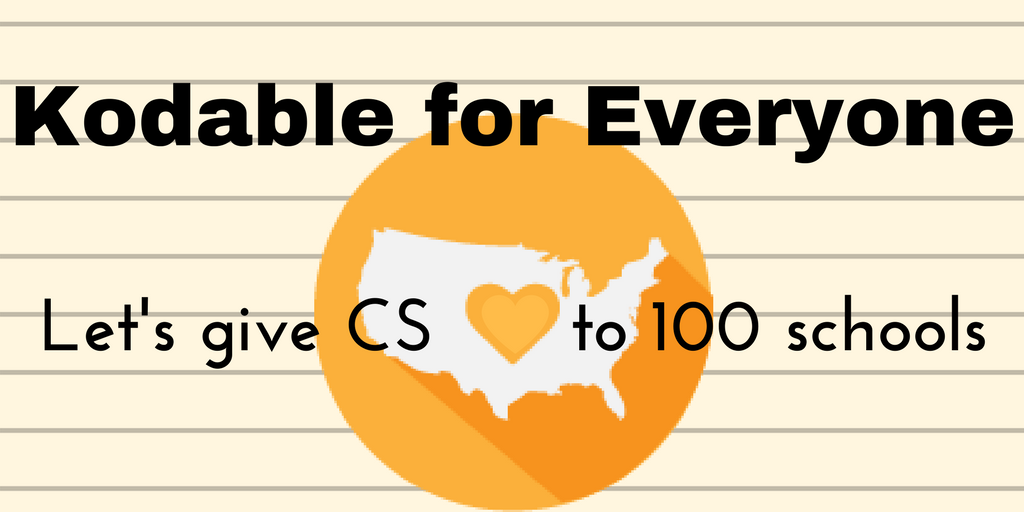 At Kodable, we believe in the power of computer science. Not only the ability it gives students to be successful in the world, but in the power it has to change the world. Computer Science is a truly transformative subject. Never before has something existed with such an ability to create value from nothing. You could build the first versions of Facebook on a $30 Craigslist laptop in a Starbucks! As of the writing of this article, Facebook is worth a little over $400 BILLION dollars.

However, as a for-profit company, we are faced with the reality that some of the schools who could use Kodable most, simply do not have the means to afford it. There are a lot of great free options available as introductions, but they fall short of providing the well-rounded education a child would need to really excel in computer science.

Students in underserved communities face a myriad of challenges that have a negative effect on academic achievement. Students who are already performing behind their peers are now at risk to fall even farther behind without equal access to Computer Science. Computer Science education improves critical thinking and problem solving skills, which translate across content areas and to life outside the classroom.

The options for these schools are less than optimal. Grant processes are long and tedious, and not all schools have the ability to ask parents or donors for financial support. Now, faced with the realities of educational budget cuts in the United States, the problem is only going to get worse. We've always believed EVERY student deserves the opportunity to learn to code. So today we're going to do our part to make it happen.

What are we doing about it?

I’m incredibly happy to announce the Kodable for Everyone Initiative. In order to raise awareness for the impact Computer Science can have in the lives of our nation’s children, we want to give Kodable to 100 schools in underserved communities.

For every Parent purchase of Kodable, 30% of the proceeds will be donated toward one year of Kodable for a school.

For every site license purchase, we will donate a year of Kodable to an underserved school.

How can you help?

You can help make computer science education happen by sponsoring Kodable for a school in an underserved community. Give as little as $1. Every bit helps.

For every $1000 donated, we will give the entire Kodable curriculum, free of charge, to one school in need.

Kodable is used all over the world, so your donation could go to someone anywhere around the globe - from the United States to Haiti to Vietnam. You can make a difference.

Can Computer Science benefit your school?

We will be selecting schools as we meet each $1,000 milestone. Schools with financial hardship, below proficient test scores, large ESL student populations, or a focus on inquiry goals will be highly considered. We’re looking to help schools with a passion for STEM and Computer Science as an innovative way to improve the lives of their students.